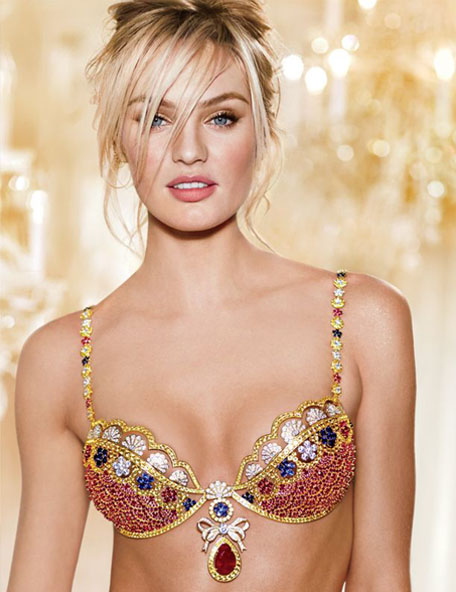 The bra and belt combo is created from 18 karat gold, moulded to her body, and features over 4,200 precious gems, including diamonds, rubies and yellow sapphires and also features a 52 carat pear-shaped ruby in the centre. Designed by renowned jeweller, Mouawad, this Royal Fantasy Bra will be the centrepiece to the Victoria’s Secret catwalk extravaganza. Typically, one model is chosen among the Victoria Secret Angels to wear a bejewelled bra, dubbed the “Fantasy Bra” and features precious gems, including diamonds.

The first Fantasy Bra made its debut in 1996, when it was photographed on Claudia Schiffer wearing the “Million Dollar Miracle Bra”. Victoria Secret made headlines when they revealed their most expensive 10 million dollar Millennium Bra, for which Heidi Klum was chosen to model for it. The bra featured a framework of platinum inlaid flaunting 2000 diamonds and sapphires, recreating a starry sky with blue background and sapphires resembling numerous stars. The bra also comprised of platinum and diamond-studded straps.

The Fantasy Bra first made its way onto the runway in 2001, when Heidi Klum modelled the “Heavenly Star Bra”, covered in star-shaped diamond patterns and a 90-carat emerald cut diamond as its centrepiece, worth $12.5million (R123m). Heidi wore the Fantasy Bra again in 2003, with the “Very Sexy Fantasy Bra” set with diamonds, worth $11million (R108m).

The Red Hot Fantasy Bra worn by Gisele Bundchen in 2000, earned a place in the Guinness World Records, as the most expensive item of lingerie ever created, with a price tag of $15million (R147m). It was created form 1,300 precious stones including 300-carats of Thai rubies and diamonds.

Other famous supermodels to wear the Fantasy Bra:

Price: $10million (R97m)
Tyra Banks modelled this lavish bra, embellished with 3,000 diamonds and set in 18 karat white gold. The bra also has a 70-carat pear-shaped diamond as its centrepiece.

Price: $12.5 million (R122m)
Gisele Bundchen was again asked to model the Fantasy Bra, made from 18K white gold with over 2900 pave set diamonds, 22 ruby gemstones and a 101 carat diamond as the centrepiece.

Price: $6.5million (R63m)
This diamond-studded bra is encrusted with more than 2,000 Hearts on Fire diamonds with a 10-carat diamond brooch centrepiece, modelled by Karolina Kurvoka. 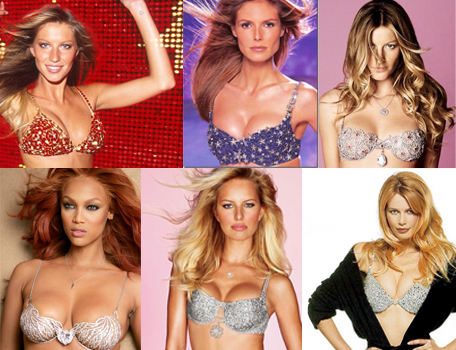 Open 7 days a week from 9am - 9pm.
Diamond myths and legends

The Legend of the Hope Diamond
Scroll to top